Last week I had the pleasure of showing my mom and dad around Amsterdam as part of the 25th anniversary trip to Europe. Tuesday morning, I met them at the airport and took them to their hotel. After checking in and renting some bikes we got right to exploring the city. We stared in De Pijp where we walked through the Albert Cupyt market and got right to shopping, dad got a new scaly cap, mom a scarf, and I, a new bag. We also tried out some of the sweets at one of the stalls, we got coconut cookies that tasted like macaroons. Afterwards we biked over to The Corner Bakery where my neighbor works and had been raving about. The shop did not disappoint and I’m glad we made reservations, it was quite a busy and small place. We all got sandwiches and decided we were too full for one of their famous freak shakes for dessert and chose to head over to Brouwerij’t IJ for beer instead. Along the way we made a pit stop at the botanical gardens which had plants still in bloom in green houses from all over the world and the foliage in the outdoor gardens was in full swing. Dad was really ready for beers at this point, so when we finally made it there we each ordered a flight so we could try them all out. After we each tried them all and decided on our favorites we each got a glass to toast in celebration of my first legal drink with my parents, a redo of my 21st birthday celebration there with my friends, and their 25th anniversary. We also had reservations for dinner at an Indonesian Restaurant near my apartment so after we rode to through Vondelpark on the way to my apartment. I showed my mom my favorite willow trees that we got to climb. I’m very happy they both really liked where I’m living and appreciated how clean I try to keep my apartment. At dinner at Restaurant Blauw we ordered the traditional rice table, I’m really glad my mom liked it because it is the cuisine is very different from anything she has had before. After we had finished our meal I sent them on their way back to their hotel which they thankfully successfully made it to without guidance.

The next morning, we planned to meet up outside Concertgebouw which has free lunchtime concerts every Wednesday, it’s only required you wait in line and it is one per person. Unfortunately, I got a flat tire on the way and Mom and Dad had not quite navigated their way there in the most direct way so after I went through and got my ticket, I threw on a scarf and asked a kind gentleman on the street if he would go through the line with me to get two more tickets, thankfully he obliged and Mom, Dad, and I were able to enjoy the show together. The concert was great and the musicians were very lively which made the whole show even more enjoyable. Afterwards, since I had a flat tire and there was not a nearby shop to fix my tire, I rode side saddle all the way to the Anne Frank house. I made the sort 1.5 km there surprisingly successfully blinding guiding Dad and we were just in time for the tour. It was really nice that my mom had scheduled a tour of the house for us so we didn’t need to wait in the massive line. We got to walk through her house which was much larger than I had imagined. There was an entire building in the front dedicated to her father’s business in the front and just about an entire house accessible in the back through the secret bookcase door. As we walked through we were able to have an audio tour about each room and the history of the city in the time period. Unfortunately, Anne Frank died in WWII due to illness but her father survived and chose to read her diary after her death which he felt was worth publishing as a way to learn about life during the war and help her legacy to live on. Since then, her diary has been given many awards and translated into many different languages. It was unusually sunny and warm out after the tour, so we crossed a bridge to grab lunch on along the canal at a traditional brown café. They are given this name because in the past people were allowed to smoke inside, turning the walls brown, even though you can no longer smoke in the bars in Amsterdam, the idea and name lives on. I ordered fries which coincidently came with bitter ballen for my parents to try traditional Dutch foods. I’m glad they also loved the fries with mayo and bitter ballen with mustard. My parents had been wanting to do a canal tour of Amsterdam and there happened to be many leaving from right in front of the Anne Frank house, I invited my neighbor Gia to join us and we went on an hour-long tour of the city. The canal tour was surprisingly a lot of fun on the small boat. They provided pillows and blankets and served Heineken. My favorite part of the cruise was when we went under one of the lowest bridges in Amsterdam and all had to lay flat to go under! The people who did the tour were great and also students in the city. Their friend had just recently built the entire boat and they started the company together. The day before my dad has spotted the bright lights of rides in Dam Square from the brewery. Still wanting to check it out we walked over to the square and sure enough an entire carnival was in full swing. Gia and I, decided to go up in the big swings which was one of the best things I’ve done in my time here in Amsterdam. Since we have been living in the city for over two months now, we were able to tell where we were pointing out landmarks and it was amazing to see the city from up above just starting to be lit up as dusk approached. We spent some time walking around the carnival until Gia had to say goodbye to go meet up with one of our friends for dinner. Since we were already so close to the Red Light District I figured I would walk my parents through, it was still only early evening and I figured it would probably be pretty calm. Thankfully it was, but I was still able to give them a little taste of what it is like in there. Since I still had a flat tire, we thought it was best to go back to my bike and grab dinner nearby. Thank goodness for my dad, he is so good to me and rode me side saddle back to my bike and then let me ride his rental bike while he walked my bike to dinner and then all the way to the bike repair shop near my apartment.

The next day I had to give a final presentation in class, so while I did that my parents went on a tour of the windmills. I’m so happy that they found it through their hotel because they really wanted to get a taste of The Netherland’s history and see the cheese factories and wooden shoe factories. We met up again at Van Gogh after and went through the museum. I wanted to give them a little walking tour of Amsterdam after and brought them through a street of art galleries, to the floating flower market, and we snuck into one of my favorite places in the city, an old convent called Begijnhof which feels like an oasis because of how quiet it is in there. We then set out to find the bench where a scene was filmed for The Fault in Our Stars. I’m shocked and grateful that we were able to find it and rest on it for a little while. For dinner, we headed to Food Hallen which has all sorts of stands with different kinds of foods and drinks. It ended up being a little further than I thought, sorry Mom! But once we were there we soon had beers in our hands and food in our stomachs while we talked about how well we enjoyed the past few days in my new city and made plans for our next adventure to Copenhagen.

Mom and Dad at the Corner Bakery 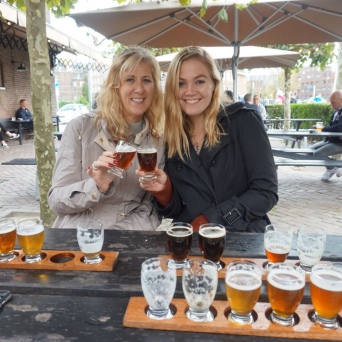 Mom and I trying flights of beer

Flowers at the Floating Flower Market

The Fault in Our Stars bench

Last night in Amsterdam at Foodhallen

One thought on “Welcome to my New Home”