Well I’ve finally made it to Amsterdam, my new home for the next five months, and have found a spare moment to write. Even though it is 12pm here or 24:00. The weather here is much more bearable than back in Boston, it feels like Fall which puts me in a great mood. It is my favorite season because there is always a sense of new beginnings and a fresh start which is exactly what I am getting here in a new country. Plus it means my birthday is coming soon!

It has been interesting so far but I think I am finally finding my footing here. The first day entailed me waiting around for a while and getting my key to my apartment. The apartment is brand new and I have my own bathroom and kitchen! There I was able to meet my lovely next door neighbor so we went out to grab some lunch and groceries. The direction we went to run our errands seemed quite residential with only a few stores. After this I became disappointed in where I was living and Ubered over to Uilenstede where some students from my home university are staying, it is similar to Southwest back home. It seemed like such a far drive and I grew worried I was so far from them and had not met many people living in my apartment building who were also here for only a semester. I was able to hangout there for awhile and head over to Il Caffe, a bar on their campus. It seemed as though everyone at the bar was also living there. While we were there it began to downpour, and I mean DOWNPOUR, which apparently happens a lot here. I ended up Ubering home at the end of the night pretty upset that I lived so far. My first day had not gone quite as I had hoped.

Luckily, when I had just gotten home, I heard a knock on my door. The girl across the hall was just moving in and needed some help getting in. While I was out talking to her the guy in the room next to me came out and introduced himself. Both of them are from the States and I invited them to come in and hangout so we could get to know each other. She ended up being from New York and him from San Diego. The timing could not have been more perfect for me to meet my new neighbors.

The next morning when we all woke up, we decided to go grocery shopping and explore the area. I was able to get some good groceries at Albert Heijn, which are mostly all organic, for low prices. I purchased my first bottle of wine and some beers here to stalk up my new kitchen.

Later in the day I was finally able to have some of my first “Amsterdam Experiences.” I headed over to the university’s campus and was able to pick up my new bike. And new favorite mode of transportation. EVERYONE rides bikes here and I’ve seen some pretty talented cyclists, such as the moms who strap one child to the front of the bike and another to the back. Many props to the Dutch moms. With my new bike I was able to bike over to Uilenstede which is not far from campus. After I got there we decided to head into the city via tram with my friends and go to where all the famous museums are located. Right when we got off the train at Museumplien we could see the Rijksmuseum, the Van Gogh Museum, and the Stedelijk Museum all surrounding a park. We walked around and took pictures of everything, its fun to be a tourist in your new city. We stumbled upon Vondelpark and strolled around for awhile. We continued walking around the Museumplein and which seems pretty touristy but has some nice spots. Again, it DOWNPOURED while we were sitting outside but we did as the Dutch do and just moved closer to the building and put up with the rain. At the end of the night I headed back to Uilenstede to stay over.

The next morning I decided to take on the streets with my bike to get back to my place. The streets with the bikes are a LITTLE confusing because sometimes bikes have lanes on the left and right side of the road and sometimes it is on one side of the street with a dotted line. I really should look up the traffic signals and rules. Because of this confusion, I ended up going through a rotary in the wrong direction! Luckily it was 08:00 in the morning on a Sunday so there wasn’t much traffic, but a bus did honk. Sorry! After that I got off my bike and walked it for a little until I knew I was in the right spot. After only a short bike ride I had made it home safe and sound pleased with my ability to ride a bike and strong sense of direction. I think Amsterdam and I will get along just great, once I figure out the traffic signals.

Enjoying these canals, a beautiful site on almost every street 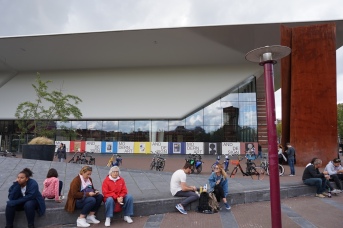 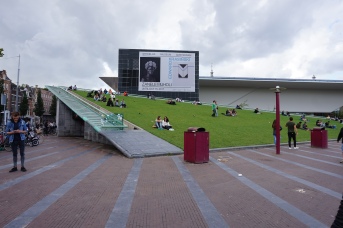 2 thoughts on “I have arrived!”