The first week here in Amsterdam lead to a bit of homesickness but I have met people from all over the world and many of them felt the same way. However, this mutual feeling only brought us closer together and got us to go out and explore the city. I’ve spent just about everyday exploring the city and school and I know there’s even more to see.

On Wednesday, as part of orientation for international students we got to go on a canal cruise to see the city in a different way. While on the tour we saw many of the oldest buildings in the city where merchants used to live. My favorite fun fact from this tour was that when you look at the tops of the buildings here you will see large hooks hanging over the street. A majority of the buildings here have these because when the properties were bought, the prices were determined by the amount of meters the front of the house took up on the street. This led to all the houses being are quite narrow which caused narrow stair cases. Because the staircases were so narrow, the inhabitants could not bring furniture up the stairs so they hoist them up on a rope strung through the hook to get the furniture into the homes.

After the canal tour we walked around a part of the city where the Amstel River flows and went to another flea market called Waterlooplein. This flea market is the oldest in the entire Netherlands. They sell just about anything you can imagine from Amsterdam souvenirs to antiques, and BASKETS! Here I was able to buy a basket for my bike which has made shopping much easier. Afterwards we picked up some food for a picnic along the picturesque canals. It seems as though everyone here loves to picnic, there are always people sitting in the park or dangling their feet into the canals enjoying lunch.

On Thursday we went to an festival at a bar hosted by the school so we could meet even more international students. Here they served Heineken and fries. I think that is about as Dutch as one can get. The Dutch love their beers and fries, or as they say bieren and friets. Everywhere you go they serve heaping portions of fries along with an array of dipping sauces. The most common is a sauce similar to mayo but with some pickled onion in it. The best sauce I have tried on fries has been this one called “Joppie.” Joppie is similar to a honey mustard sauce but thicker and much much better! At this event I met a girl from Norway named Henriette. Through her I was able to meet many Norwegian people which I have to say seem to be the nicest people I’ve meet as a group. They are quite a welcoming bunch and lead great conversation.

The weekend entailed many events organized for us. We went to a improv comedy show which was so funny. One of the skits they did they sent an actor out into an Uber which the audience followed via Facetime. The crowd shouted out random funny phrases that he had to say out loud in the Uber to see how the driver would react. Some of them included “There’s so many strippers in this city” and “I think I’m going to kidnap my ex girlfriend’s boyfriend” to which the driver responded “I think you should hire someone for that.” I cried laughing the entire skit and really enjoyed myself along with all my new friends. The next day we did a walking tour of the city where we learned all about the history of the streets which we had been exploring all week. While on the tour we ran into some guys dressed in tutus. I discovered this is common in Europe for Bachelor parties. In some of the parties the friends dress up the groom and in others they all get dressed up. It is such a funny event and I hope to see many more while I am here! Later that night we went to dinner in Amsterdam Noord, which is across the river IJ. After dinner we went to a boat party on the river and got to dance all night.

Today I spent the afternoon in the park with other students who live in my building from all over the world and I got to have great conversations with all of them. Sitting in the park enjoying the sun with new friends put a huge smile on my face. They said today was one of the hottest days they have had all summer and I haven’t seen any rain yet, no complaints!

This first week has been great and I have met so many great new people! Each person really has taught me something new about the world and myself. I’m learning so much even before classes have started! Besides Dutch, I have not learned much Dutch. It’s a very difficult language and I can’t quite make the throaty noises that seems to be a part of every word yet but I am trying my best! 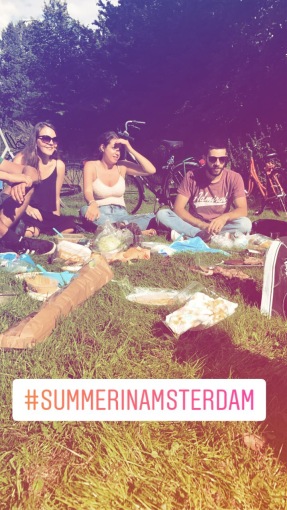 Hottest day of the summer 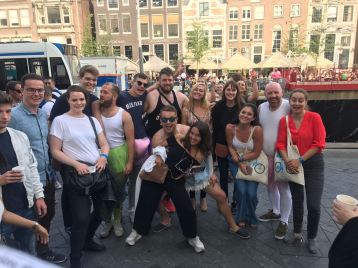 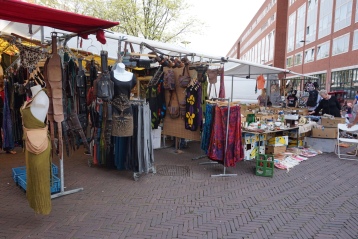 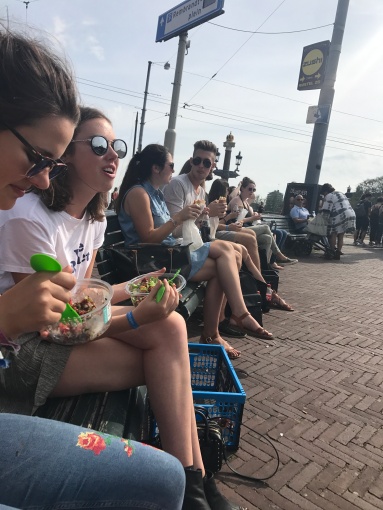 Picnic on the canal

One thought on “One Week In”