In one of my courses here, Amsterdam: Global Historical  Perspectives, the focus of study is how trade has impacted cities across the globe and transformed them into the cities and waterfronts they are today (I signed up for it because it said there were field trips). BUT, what I have learned in the class is that Amsterdam has a deep history of trade with the East Indies. Influenced by this trade route, there are quite a few well known Indonesian restaurants.

Last weekend Gia, Berkley and I decided to give one of them a try. We were able to score a reservation at Aneka Rasa, right in the center of the city. We got the traditional Indonesian meal called a “Rijsttafel” which means rice table. Your order is based off the number of people you have in your group and each person pays one set price for the meal. Two huge bowls of rice were given along with chicken, beef, and veal sauteed in different sauces, various vegetables in different sauces such as sweet and sour sauce, coconut sauce, and the Indonesian version of fries all to top off the rice. For dessert we were each given a mini version of Spekkok, a green layered cake that tastes similar to pound cake. We were extremely pleased with the meal and can see why everyone recommends trying it out while in The Netherlands.

After dinner we walked around the center of the city for a bit since you really never know what you will find in all those narrow streets. While walking we decided to grab dessert and one of the MANY hole in the wall dessert cafes. Gia, really craving a Dutch Waffle, decided on this place called Sweetella. Specializing in waffles, this place had many options to choose from. Gia decided to go all out with the “special” waffle, while Berkley and I grabbed a cupcake and brownie which we got pretty quickly. We went over to grab a table in the back while we waited for Gia’s waffle to come out. After respectively waiting a little for Gia’s waffle to arrive, Berkley and I gave in and dug into our desserts. After a few bites, all of a sudden “Fireball” by Pitbull started blaring in the cafe. The server walked out from behind the counter with a huge plate stacked high with waffles with a sparkler coming out the top! Then he shook the powdered sugar shaker over it and the whole plate went up in flames, he did this over and over again as he slowly sauntered over to the table with the waffles. We couldn’t stop laughing in disbelief of what had just happened and came to the consensus that it made sense why the desserts were so pricey.

As we were all finally enjoying our desserts, a group of guys came in and also ordered the special waffles. But this time a full fledged food fight broke out, when the server began shaking powdered sugar over the sparkler resulting in large flames, another worked dressed in a black morphsuit (full body spandex suit) also came out shaking sugar everywhere. Immediately the group of boys also joined in shaking sugar and jumping on tables. Gia, Berkley, and I, of course all wearing black, were soon covered head to toe in sugar. In further disbelief of what just happened we had ceased eating our desserts and were looking for an escape route. But because we had chosen a table in the back and the cafe being so small, the only way out would be to attempt to jump over the guys wrestling on the floor. After waiting a little, a moment of calmness occurred and we sprinted out of the shop abandoning our desserts. A crowd had gathered outside the shop of tourists attempting to peer in the window, wondering what on earth could be happening in the cloud of powdered sugar.

We continued to sprint once again through all the tiny streets trying to get as far away from the cloud of powdered sugar as we could before making an attempt to dust ourselves off. Ending up at one of our favorite bars, Hill Street Blues, we finally felt safe and semi-clean again. But we could not contain our laughter about what had just happened. Our goal of the night was to try out typical food found in Amsterdam and I can confidently say we met that goal and then some. 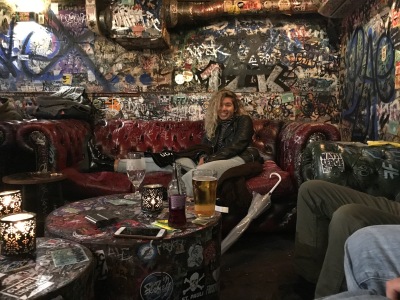